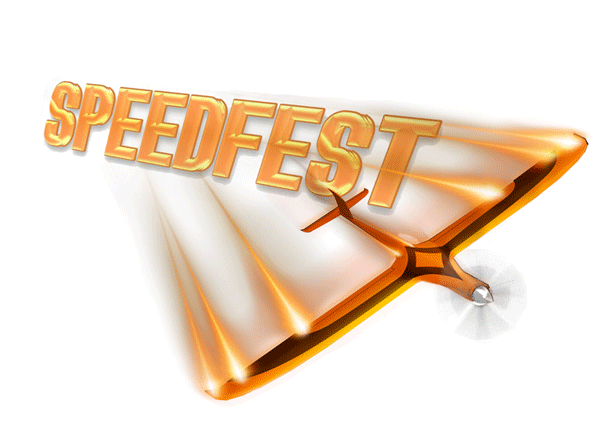 
Speedfest is an exciting, high-speed aircraft design competition which is intended to foster enthusiasm for aviation, and unmanned aircraft design.  There are two flight classes:   Alpha Class is the Advanced class which is open to all collegiate-level teams.  India Class is the Invitational class.  It is open to high-school level teams on an invitational basis.  The top 3 teams in each class will be recognized with awards.  The winners of each class will be awarded the Speedfest Cup. Contents: Mission Requirements and Design Constraints
Flight Procedures and Scoring Safety Requirements
General Aircraft Requirements Contest Day Information Eligibility Entry Form Format
Deadlines Speedfest Site

Safety must be the number one priority of all contest participants. The Speedfest organizers have gone to great lengths to keep the event safe for participants and spectators.  Please carefully note the following:


Pilots General Aircraft Requirements Landing Gear No part of the aircraft may be jettisoned or fall off, including, landing gear which must stay with the aircraft at all times.  For example, no “dollies” or sleds.   Propeller Metal propellers are prohibited.  Teams must paint the tips of their propellers (approximately 0.5 inches) on both sides, white.  This is to reduce chances of injury. (Teams should balance their propellers after they are painted.)

Engine MountingThe engine should be securely attached to the mount, and the mount to the airframe.  Due to vibration, mounting bolts must use nylock nuts, or blue Loctite. Radio Gear: Only 2.4 GHz spread spectrum radios will be allowed.  The receiver battery must be a 4-cell (4.8v) NiCD or NiMH pack and have an external switch.  There must also be a simple means for displaying voltage to the judges.  At a minimum, teams may have an external connector to check voltage with an expanded scale voltmeter. Any brand of voltmeter is allowed as long as it is a load test type.  Alternatively, teams are encouraged to use a voltage monitor (example) mounted permanently to the exterior of the airplane.   Range Check and Fail-Safe: Aircraft receivers must be programmed with a fail safe system which will cut off engine power if signal is lost or interrupted.  Operation of this feature must be demonstrated.  A standard range check must also be demonstrated using the procedure detailed in the transmitter manual. Team Name Lettering Each team will mark their airplane with their team name.  Lettering shall be clearly legible and sized at least 0.5 inches tall.  Lettering shall be on the top surface of the wing.  Abbreviations may be used.  For example; "ZSU Zebras" would be acceptable. Preflight Airworthiness Inspection of Aircraft
Prior to competition, all aircraft shall undergo a safety inspection.  Safety inspections will be conducted on a first come, first served basis. Teams are encouraged to go through safety inspections on the Friday afternoon of Speedfest so as to not miss any flight opportunities.

The overall quality of construction must be considered safe and airworthy. Safety inspectors will be checking the following: Repairs: Any aircraft that has been damaged after a safety inspection or has a known history of problems shall not be permitted to fly until it has been satisfactorily repaired and re-inspected. Materials used for repair may come from any source.

Confirmation of class rules:
Judges will also confirm that all aircraft entered comply with the Design Constraints.  This will include inspection and measurements of the airframe and engine for compliance. Contest-Day Information Registration
During the designated time on the day of the event, flight crews must register.  Speedfest officials will then provide each with a flight line pass. Registration consists of the following:
Flight Sequence
Optional Speedfest Team Promotional Video Award

Speedfest Teams that create promotional videos have the opportunity to be recognized at the event, and to receive awards.  Videos can promote: their team, airplane, university, country, Speedfest, or any combination of these in an entertaining and informative way.

Guidelines:
Teams will send the link of their videos to the SpeedfestAero address no later than April 20, and the winner will be chosen by electronic voting.  There are no restrictions on who may vote.  Votes will be accumulated from April 20, until Speedfest contest day.

Deadlines Contest Site Speedfest is held at the Unmanned Aircraft Flight Station (UAFS) in Stillwater, Oklahoma.   GPS Location: lat=36.1632229 lon=-96.836514
Stillwater Oklahoma is approximately 75 miles from two major airports: Tulsa International Airport in Tulsa, OK,  and Will Rogers Airport in Oklahoma City, OK.
Airfield Directions:  From all directions, the best way to get to the UAFS is to drive to the intersection of Hwy 51 (E 6th st.) and N. Clay Road (bulls-eye in map below). Then take Clay road north approximately 3.2 miles.  The UAFS is just north of the intersection of N. Clay Rd. and E. Airport Rd.